How many people are you cookin..

Party Planning in Action – What is an Indian...

Party Planning in Action – What is an Indian-American Thanksgiving? 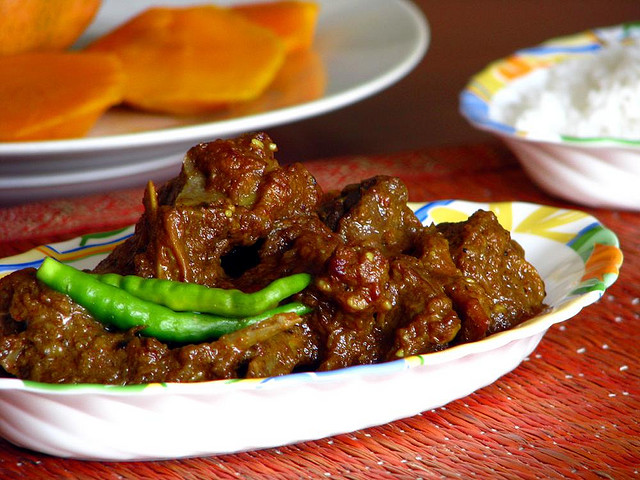 Last week, I proposed my grand Thanksgiving undertaking for this year. While it may not be six weeks of multiple Thanksgiving test dinners a week (like last year), I think my goal may be, in a way, more sophisticated.

Instead of trying to encapsulate American Thanksgiving essentials into one meal, my aim is to create a new type of cuisine: Indian Thanksgiving food.

I am not going for some new age-y melding of cultures. It is as simple as: I want Thanksgiving foods on Thanksgiving day . . . that aren’t a pain in the a$$ or too foreign to our friends and family.

But do I really want fusion? This is the question.

I could choose Indian dishes that have the traditional Thanksgiving items (turkey, sweet potatoes, etc.) as the main ingredients. Turkey curries and sweet potato dishes are not hard to find, but they are, inherently, Indian dishes. I’m just not sure if that will feel like Thanksgiving to me or just be like any other week of fall produce-centric Indian food.

Or: as a fellow foodie suggested at a Bay Area food blogger event, I could just “add some curry powder” to Thanksgiving dishes.

I don’t think I’ve come across a recipe for curry-flavored stuffing, and while I could wing it, the issue would be the same. Whether American Thanksgiving food with some Indian spices thrown in for good measure or Indian dishes that happen to involve traditional Thanksgiving ingredients, both ideas center around one cuisine without really involving or incorporating both.

Though I use cringe at the term “fusion,” especially where Indian food is concerned, it’s just what the doctor ordered this year. Maybe I have been eating too much Indian Chinese food of late–a real cuisine in and of itself, quite different from both its progenitors–or perhaps I was just intrigued by At Vermilion, a Latin-Indian tapas restaurant in New York, but I believe this can be done.

As when I began my quest last fall, I have been poking around to see what are the essential elements of Thanksgiving. I could honestly spend–and certainly have over the last couple years–hours researching and dissecting these Thanksgiving traditions. Are mashed potatoes and sweet potatoes an interchangeable starch component or separate parts of the meal serving diverse purposes? The world may never know. But for the purposes of this year’s challenge, I have broken the traditional American Thanksgiving into the following categories:

While I have thrown out a few ideas that are too likely to flop (cranberry parathas, curry-flavored stuffing, and vindaloo duck) there are a few far-fetched things I am itching to try out: pumpkin kulfi ice cream pie, fall vegetable bhaji with sweet potato pau, and coriander cranberry chutney.

My menu is definitely still in the early planning stages, and with little time remaining till Thanksgiving we are getting into dinner party gear to invite some new guinea pigs — I mean — friends over.

So look for some crazy new menus as I watch this infant cuisine develop into its own rich new tradition. Who knows–maybe cranberry parathas with garam masala spiced wine will become our favorite holiday party appetizer!

As always here at the 30 Minute Dinner Party the focus remains on fast easy dishes. While that adds another layer of difficulty to my planning, I hope it makes it easier for you to try out some of these new dishes in your own home.